There are many useful tables outlining neoplastic and pseudoneoplastic lesions with corresponding imitators. Many high quality photomicrographs are included, comparing tumors and their mimics. Some clinical photos are also present. This book is ideal for residents or fellows, as it highlights histopathologic clues and immunohistochemical stains that can be used to distinguish between entities. General pathologists who do not interpret dermatopathology slides regularly would also derive benefit from this book. Additionally, it is a wonderful tool for dermatologists as it describes specific situations where clinical information can help the dermatopathologist provide a more definitive diagnosis.

For example, pathologists are familiar with pseudoepitheliomatous pseudocarcinomatous hyperplasia and how it can mimic squamous cell carcinoma. While the authors give histopathologic features distinguishing between the entities, they point out that sometimes it is difficult to be definitive, especially when examining a superficial biopsy specimen.

Another example is the discussion of verrucous carcinoma, where macroscopic information may be critical for an accurate diagnosis. This book is meant to be an easy-to-use reference and it serves this purpose well. It compactly describes histopathologic characteristics that distinguish entities from one another. It is not intended to include comprehensive discussions of difficult entities.

Instead, readers are provided references to textbooks devoted to such topics, such as cutaneous lymphoma. That said, I think there could have been some expansion or a short table describing other mimics for some lesions such as epidermal nevi. The authors point out that these lesions imitate seborrheic keratosis. In the absence of clinical information, additional considerations include acanthosis nigricans, terra ferma forme dermatosis and acrokeratosis verruciformis of Hopf. As a relatively young pathologist practicing dermatopathology for 5 years , I was aware of most of the entities and mimics discussed.

However, I did learn some new facts and was reminded of some tidbits of information, as well as differential diagnoses, in conditions that I do not see commonly in my practice. I typically do not use p53 immunohistochemical stain, and was pleasantly reminded that p53 is positive in acantholytic actinic keratoses while re-epithelialized bullae and warty dyskeratoma are negative, and Paget disease is variably positive. In my practice, clinical information is often scarce. For cases that look like scar, I typically call the clinician to find out if a prior biopsy was performed, and if so, what the initial lesion was.

If I am told there was no prior biopsy, I typically order an S to rule out desmoplastic melanoma. However, Drs. Wick and Patterson have reminded me that ordering an HHV-8 to exclude Kapsoi sarcoma also may be prudent. Additionally, they provided a photomicrograph of a keloidal Kaposi sarcoma mimicking keloid, and I will from now on think of this entity in the back of my mind when looking at mundane keloids. Angiokeratoma is not a true hemangioma and is thought to represent reactive telangiectasias. From a philosophical standpoint, Drs. Patterson and Wick have done a thorough job categorizing and considering many entities such as this.

Epithelioid sarcoma does not express the INI1 gene product, while isolated necrobiotic granuloma retains it. Rhabdomyomatous mesenchymal hamartoma should be distinguished from adult or fetal-type rhabdomyoma. I do not think about these entities very often.

The histopathologic features described by Drs. Patterson and Wick are useful.

While the authors have done a great job with creating this reference, I have a few recommendations should there be a second edition. The authors mention that Bcl-2 does not offer much in the assistance of cutaneous B-cell infiltrates. I do not agree with this statement and would appreciate if the authors would re-consider this statement or further support this statement. Bcl-2 can be helpful in diagnosing primary cutaneous marginal zone lymphoma, which is usually positive for this marker.

Additionally, it should be noted that rare cases of T-cell and NK cell phenotypes have been described, but should be considered different entities according to the WHO.


I would suggest updating these terms. Finally, an index of acronyms would be useful. While I use acronyms heavily, there were some of which I was not aware, such as ING isolated necrobiotic granuloma. I found myself searching the text to find the initial acronym many times.

Also, some of the acronyms were different from the ones that I use. For instance, PSCN is a post-operative spindle cell nodule within the text; whereas, I know it as pigmented spindle cell nevus of Reed. It was a bit difficult to re-learn the new acronym, as I found myself reading the acronym the way I learned it, which did not make sense. Considering this is my major critique, I think the authors can commend themselves on a job well done. My last recommendation is to create an electronic application for mobile devices for residents and fellows to use when learning dermatopathology.

Having a list and such great photomicrographs of microscopic differential diagnoses for neoplastic mimics at our fingertips would be useful to many practicing physicians, as well as to pathologists in training. We are grateful to Dr. Puri for her careful review of our monograph, and for helpful comments that can be applied in the future. We are pleased that she found our book to be a worthy effort! This is a book about cutaneous non-neoplastic proliferations that mimic neoplastic ones.

As the authors note in the Preface:. There is an index preceded by all references in one location rather than after each chapter. In chapter 1, the authors lay the groundwork for what is to follow. This is followed by a detailed list of specific non-neoplastic cellular proliferations sorted by anatomic location. 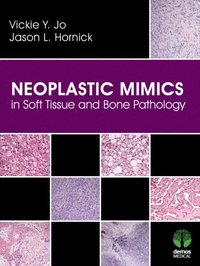